Brian, Dennis and Carl Wilson, Mike Love, and David Marks
EXTREMELY RARE FOOTAGE
Originally published on VHS in 2000 by Rudolf Music
This is a documentary film about one man's challenge to open a California teen club in the early sixties.
Produced, written and directed by Dale Smallin this black and white film offers a real life glimpse of the early sixties
with The Beach Boys performing live at a real teen club wearing Pendleton shirts.
Actual Live Performance

Actual footage from the film: 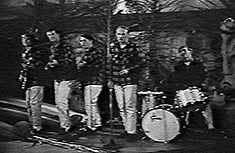 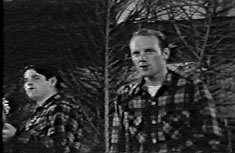 This digital copy has not been remastered and there is a slight blurb at the beginning of the Beach Boys performance.
Aside from that, it's The Beach Boys - audio and video recorded live in the summer of 1962 with just 2 mics by Dale Smallin in a gym in Azuza California. 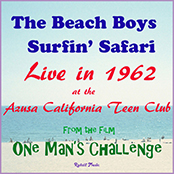 Available Now
at Amazon
and other fine music outlets

Jon Stebbins writes about the film at page 46 of his biography of David Marks, The Lost Beach Boy
On July 28, 1962 the group's performance at the Azusa Teen Club of "Surfin' Safari" was filmed for this "low budget documentary examining
the growing Southern California phenomenon of teen delinquents with too much time on their hands. In the film,
the Azusa club is held up as an example of a place where young people could gather to blow off steam
while dancing to their favorite combos. This is the only known performance footage of the Pendleton-shirt era Beach Boys .
During the performance, David is seen smiling, tossing his surfer cut, and chopping away on his sunburst Fender Stratocaster."

Becoming the Beach Boys by James B. Murphy released in 2015 states "The earliest extant film of the Beach Boys performing was taken July 27 at the
Azusa Teen Club for "One Man's Challenge" a twenty five minute, black and white documentary produced by 26 year old writer-director Dale Smallin
and narrated by Roger Christian. They spent several hours filming their two minutes of screen time which synced live audio
with video of them miming playing and singing."

From the book:
Hollywood Rock: A Guide to Rock n Roll in the Movies
15-Star Movies from 1959-64
Listed #7 at The Idolator Music News Site